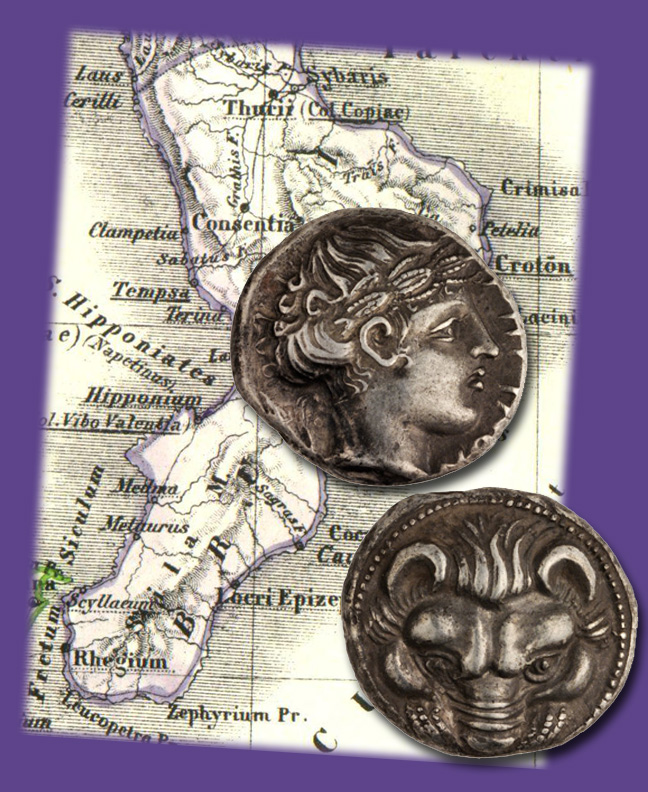 by Stack's Bowers Galleries
World Coin of the Week
The August 2013 ANA World’s Fair of Money show in Chicago will offer a large number of ancient numismatic pieces from the forerunners of western civilization, ancient Greece. In the centuries before the rise of the Roman Empire, the Greeks set out across the Mediterranean Sea to establish colonies. Along the tip of the Italian boot, nearest to the island of Sicily, the colony of Rhegium was established in the Bruttium region around 720 B.C. From this advantageous position they were able to dominate the Straits of Messina, an important seafaring trade route around Italy. Rhegium was ruled by tyrants before they established an oligarchic constitution. Unfortunately, Rhegium would eventually fall to a tyrant again, but this one would come from outside the city. Dionysius I from Syracuse, Sicily incited Rhegium’s enemies in the region to attack, and he led the final siege of Rhegium around 387 to 386 B.C. The coin we highlight this week is a silver tetradrachm from the decades before the sacking of the city. Hubert Herzfelder dates the coin to approximately 415 to 387 B.C. This period covers the range from the second Athenian expedition to Sicily; where Rhegium prohibited the Athenians access to Rhegium and declared themselves neutral. This minting period ended when Rhegium was sacked in 387-386.

The coinage of Rhegium bears the icons of the Greek deity Apollo. Apollo represents light, music, and medicine, and is most often depicted with a bow and arrow, a lyre, or both. Apollo is also the patron of truth and prophecy, and through his dominion over prophecy he offered guidance on the establishment of colonies, making him the patron of colonization as well. The obverse depicts a lion’s scalp within a beaded border. The coin is centered on the lion’s forehead, with his ears, mane, and nose included in the view. The detailed and expressive eyes convey a mesmerizing feel, and the detail is outstanding. The reverse features Apollo, often referred to as the “Most Greek of the Greek deities” for his depiction as an athletic youth and his love of music and poetry. This coin captures the youthful vigor of Apollo, depicting him bust right, with a somber expression. Adorning his head is a laurel crown, and an olive spray is visible behind his head. While the reverse is well centered so that the bust is entirely intact, the legend that is normally present along the right hand side is marred. For this type it usually indicates “Rhegium.” This piece exhibits pleasing toning and the details on the devices really stand out.

Look for this and other Ancient numismatic pieces in our upcoming August ANA Sale. Preview this impressive coin along with the rest of our auction this August at the Stack’s Bowers and Ponterio office located in Irvine, California or New York City. For details please refer to the Auction Schedule/Details link under Current Auctions at www.StacksBowers.com. To schedule an appointment, please call 800.566.2580.