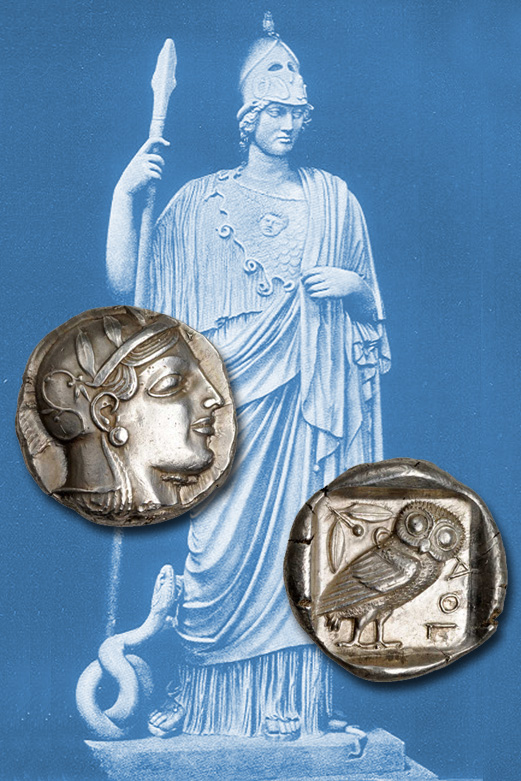 by Kent Ponterio & Chris Chatigny
World Coin of the Week

The January New York International coin show and subsequent Stack’s Bowers and Ponterio numismatic auction usher in the new year for the numismatic world. This venue regularly offers a multitude of superb ancient coins. It seems proper to celebrate the beginning of a new year with a look back to the ancient legacy of our common pastime. The Ancient Greeks used the term “Nomisma” (loosely referring to coins) from which we adapted the title of this profession to “Numismatics.” Athens, Greece — the cradle of Western civilization and the birthplace of democracy — offers the first ancient coin highlight for our January New York auction, and it represents the pinnacle of Athenian artistic style to be found on a coin.

The Golden Age of Athens facilitated this coin, as well as the flourishing of culture that included the playwrights Sophocles and Euripides, the first historians Herodotus and Thucydides, the physician Hippocrates, and the father of Western philosophy, Socrates. These figures contributed to the advancement of classical learning during the Age of Pericles. Easily the most prominent and influential Greek statesman of the Golden Age, Pericles was also an accomplished orator and general of Athens. His contemporaries knew him as “the first citizen of Athens.” It is fitting that this Golden Age also produced some of the finest coins that Athens minted.

The City-State of Athens struck coins which bore an effigy of their patron deity, Pallas Athena. Credited as the goddess of wisdom, just warfare and civilization, one of Athena’s many symbols includes an owl, which today still symbolizes wisdom. The Silver Tetradrachm of Athens bore the head of Athena facing right, wearing an Attic style helmet with three evenly spaced olive leaves facing upward along the crown of the helmet. A palmette begins at the backside of the helmet and wraps around near her ear. Details of the horse hair plume (which is normally off the flan) can be seen at the far left side of the obverse, just behind the helmet. The finer points of Athena’s face are crafted with exceptional detail, including the lines of her hair under her helmet, her earring, her full and pouty lips and her almond shaped.

The reverse exhibits the Owl of Athena; this particular style of owl is a little thicker than the other reverse designs from Athens’ numismatic history. The owl’s back shows a slight curve running from head to the edge of its wing. The head of the owl is cocked slightly, and it seems to stare out at you. At the upper left appears an olive sprig, also a symbol of the goddess Athena; according to some myths it was Athena’s gift of an olive tree to the city, which earned her their unwavering devotion. A tiny crescent moon also appears behind the owl, very nearly touching the neck and back of the owl. The ethnic “AOE” is an abbreviation whose longer form translates to “of the Athenians.” The entire design is found within an incuse square pattern. The example we are offering in our January 2014 auction is particularly choice, with a sharp strike and is outstandingly centered allowing the full reverse design on a round flan.

Overall this is a remarkably well made coin, with exceptional centering on both sides. The superb metal quality has allowed the high state of preservation, and indeed it places this coin as one of the most well preserved Starr group owls that this cataloging team has had the privilege of handling.

Look for this and other Ancient numismatic rarities in our upcoming January New York International Sale. Preview this impressive coin along with the rest of our auction this December at the Stack’s Bowers and Ponterio office located in Irvine, California. For details please refer to the Auction Schedule/Details link under Current Auctions at www.StacksBowers.com. To schedule an appointment, please call 800.566.2580. While our Stack’s Bowers and Ponterio January New York International sale is closed for further consignments, we are currently taking consignments of world and ancient coins for our April 2014 Hong Kong and August 2014 ANA sales. If you are interested in consigning your coins and paper currency (whether a whole collection or a single rarity) be sure to contact one of our consignment directors.