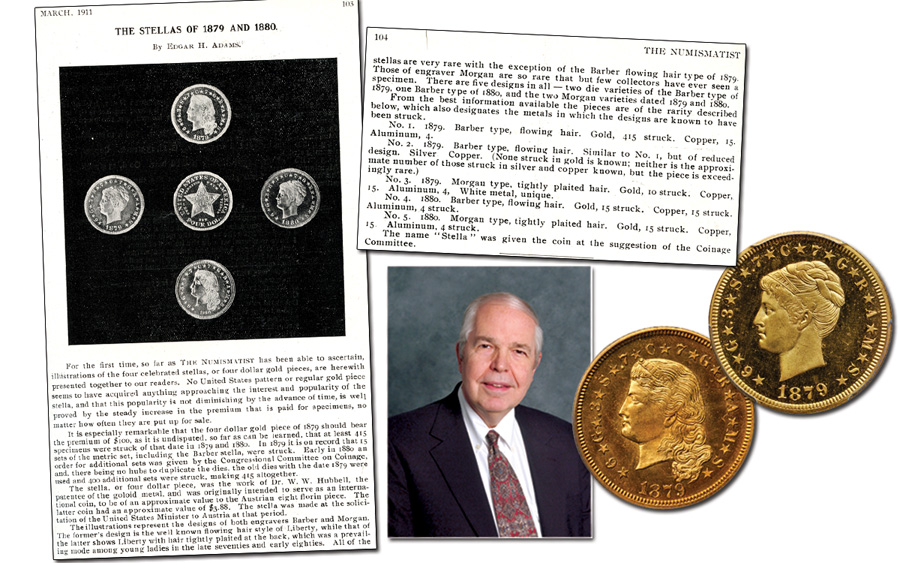 by Stack's Bowers Galleries
From the Desk of Q. David Bowers

The $4 gold patterns, named Stellas for the star on the reverse, are well known today. Most familiar is the 1879 Flowing Hair. We all love them dearly and when examples cross the auction block there is always a lot of interest and excitement.

The making of the 1879 Coiled Hair and both varieties of 1880 was kept a secret. At the time certain Mint personnel were creating rarities and making restrikes for their own profit, with no records kept. The coins were filtered into the marketplace through J.W. Haseltine, a prominent Philadelphia dealer, and certain others. Some Mint officials sold rarities privately to collector such as T. Harrison Garrett

In 1908 and 1909 Edgar H. Adams, the most prominent numismatic researcher of his day, and his best client, William H. Woodin (who in 1933 would become Franklin D. Roosevelt’s first secretary of the Treasury), made private deals with Mint officials and obtained thousands of long-hidden patterns. This enabled Adams and Woodin to study them, announce varieties previously unknown, and to share certain mintage figures.

In The Numismatist, March 1911, a full set of $4 Stellas was published for the first time, plus mintage figures Adams was able to obtain. As to the accuracy of the figures, no one knows. Most of what was said by the coiners involved is of questionable veracity.