1586-NB Taler of Lithuania and The Talers of Transylvania 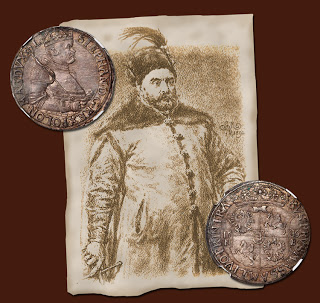 by Greg Cohen
World Coin of the Week
Coming to the auction block during our official ANA World auction sale, is a wide selection of coins from the Demarete Collection. We are proud to offer as part of this diverse collection a lovely Lithuanian Taler, 1586-NB, graded MS-64 by NGC. Issued during the final year of Stephen Bathory’s reign as king of Poland, this coin’s obverse depicts a half-length, armored portrait facing right. The king wears a crown and carries a scepter. The reverse shows the coat of arms. The piece is very well struck and well centered with a rich silver russet tone, from long term envelope storage (as all the coins in the Demarete Collection were stored). These Talers are scarce as a type, and extremely rare in such fine condition, and this is likely among the finest known for the type. Well worth a premium bid and destined to reside for a long time in another world class collection.

It is very interesting to note the migration of nobility in Eastern Europe during this period, as the Bathory family ruled Transylvania, and the Demarete Collection also features a wonderfully high grade selection of Transylvanian Talers issued under Sigismund Bathory (1581-1602) and Gabriel Bathory (1608-1613). This group of Talers are as follows: 1592 NGC AU-55; 1593 NGC MS-62; 1597-NB NGC AU-58; and 1609-NB NGC MS-62. The last is a beautiful coin with rich luster and attractive toning. The strike is as strong as can be expected for a coin of this era. Rare as a type, rarer still in this extraordinary condition.

The Bathory Family has a rich and interesting history; starting as a noble family in Hungary, the impressive family lineage is seen on the coins offered here. Stephen Bathory, as well as being King of Poland, was a Prince of Transylvania and Grand Duke of Lithuania. Sigismund Bathory was Stephen’s grandson and was Prince of Transylvania; Gabriel was Sigismund’s second cousin, and also was Prince. Other members of the family held high military rank and position in the clergy. These coins represent a great memorial to this important noble family.

Each of these coins have been off the market for decades, and were in a very advanced collection. Their quality is hard to rival, and they will be welcome additions to any collection of Eastern European crowns. These will be offered in our morning session, Friday, August 10, so be sure to view these marvelous rarities either in California, New York or in Philadelphia. Then plan to bid in person, over the internet (either before the sale or using our live bidding program), or make arrangements to bid on the phone during the auction; any way you like, plan to bid liberally as the competition on these lovely coins will be intense.