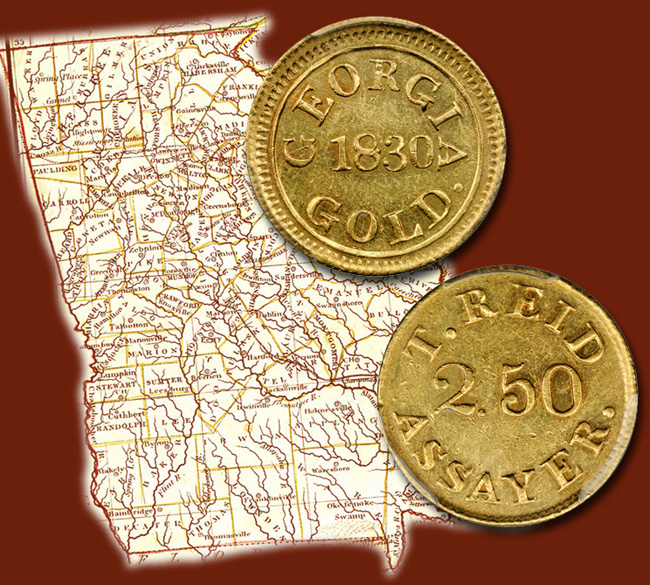 by Stack's Bowers Galleries
United States Coin of the Week
The date is drawing near for Stack’s Bowers upcoming auction of the Official May 2013 ANA National Money Show, to be held May 9-10 in New Orleans, at the Ernest N. Morial Convention Center. This event will showcase a number of outstanding numismatic rarities, but few, if any, of those items will surpass our offering of a Templeton Reid quarter eagle, graded AU-58 by PCGS.

There are only a dozen of these Templeton Reid quarter eagles graded by PCGS in all grades, this is the second finest they have seen, nudged out from the top position by a single coin that grades Mint State-60. The obverse design is a simple affair with T. REID above, 2.50 at the center and ASSAYER. below. For the reverse design a broad dentilated rim is noted, with GEORGIA GOLD around and 1830 at the center. The surfaces show minimal marks and are quite pleasing. Strong eye appeal, surface quality and handsome orange-gold color prevail on this majestic and historic coin.

As noted in the Donald Kagin reference on the series, the Templeton Reid coinage is the first privately issued gold coinage resulting from the gold rush in Georgia and the Carolinas. Reid’s concept of coining native gold dust would save miners five to fifteen percent on conversion of their dust for needed supplies or to pay for transportation of the dust to the Eastern banks. At the time, our federal currency was inadequate to serve the needs of this region.

Reid was born in Georgia in 1789, his occupations included metal worker, cotton gin manufacturer, jeweler, watchmaker and the necessary gunsmith skills. Once gold was discovered, this thinking chap determined to build his own coining press and strike gold coins from the dust discovered by the miners. On July 24, 1830 a local newspaper announced that Reid was coining gold pieces of the $2.50, $5, and $10 denominations. The coins were struck without alloy, just as the gold dust was found. By late 1830 the hue and cry went out that Reid’s coins did not contain the precious metal stated and questions arose as to the legality of his private coinage operations. These two complaints spelled the end of his coinage, as a reputation once destroyed, cannot be regained.

Letters appeared in the local paper attacking Reid’s coinage as being underweight. Reid fought back, but in fact he was incorrect in his belief that the native gold in the area was nearly pure — in fact it contained traces of silver and tin, which fell short of the estimated value stamped on the coins. Thus his calculations were off and he actually charged a high seigniorage to produce these coins. The other difficulty was the fact that our federal government did not look kindly on competition in coinage, states were forbidden from striking their own coins, but not necessarily individuals. No government action was taken against Reid although his production of coinage was well known to federal authorities. The local public attacks continued in the press, and Reid’s coinage was doomed once the confidence was gone. Reid ceased coinage after two and a half months in operation, then focusing his efforts on refining his cotton gin. Today there are perhaps 40 examples of his coins in existence, many of these with problems. This is one of the finest of this historic, ground breaking private gold coinage.