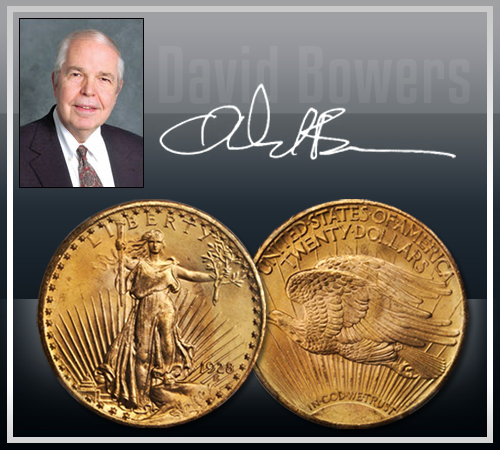 by Stack's Bowers Galleries
From the Desk of Q. David Bowers
As I write these words the news is filled with accounts of the price of bullion gold taking a big drop. Copper too, and some other things—but collectors mainly keep their collective eyes on the precious metal.

While most dealers, collectors, and others, and certainly those who hold gold, hope that the price will rise, over the years there have been some hiccups. In a way this might mean an advantage for you if you’ve been sitting on the sidelines wanting to buy some common-date double eagles, American Eagles, or other coins.

Right now there is a “Big Discount Sale” going on!

Psychology is such that coin collectors, stock market investors, real estate speculators, and others love to buy in a rising market, but often sit on the sidelines when profits drop.

Famed financier Bernard Baruch attributed his fortune to buying and selling at the right time. In effect, “When people want to pay record prices for stocks, I’ll sell them mine. When they want to unload them cheaply, I am a buyer.”

There are quite a few other places in numismatics where bargain sales are taking place. As a general rule, Choice and Gem Mint State commemoratives from the 1892-1954 classic era are cheaper now than they were in 1989—and that’s 24 years ago! In the past few years there has been a slump in the market price of many National Bank Notes of the 1863-1935 era, especially for bills in less than Uncirculated grade. A group of bills that might have cost $10,000 five years ago might cost you $6,000 today.

While you are keeping an eye on the price of gold, you might pause to ask yourself: Is it a good time to buy?