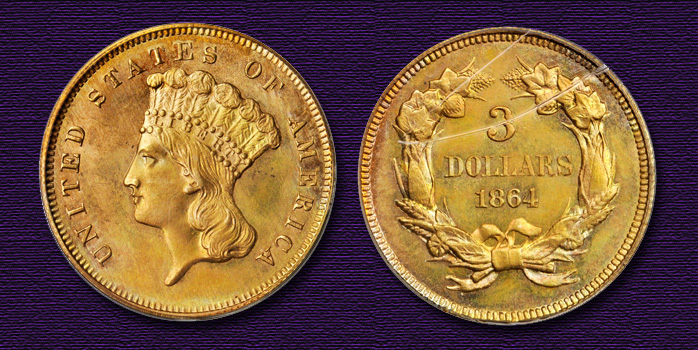 by Stack's Bowers Galleries
United States Coin of the Week
Many exciting rarities are on deck for Stack’s Bowers Galleries’ upcoming March 2013 Baltimore Auction. One of those items is an incredible Gem MS-65 (PCGS) 1864 three-dollar gold piece, a Condition Census offering. This survivor from a low mintage Civil War issue displays an impressive combination of superb technical quality and exceptional eye appeal. Previously part of the Harry W. Bass, Jr. Collection, sold by us as lot 678 in our October 1999 catalog of Part II of that impressive collection. This coin is guaranteed to draw the attention of serious specialists in this popular and challenging 19th century United States gold series.

A lovely array of blended pastel coloration adds to the desirability. Mint-green, honey-gold, and pink-red are seen on both sides, especially on the reverse. The design motifs are sharply impressed and fully defined, and the smooth, virtually abrasion-free surfaces are characterized by a lovely satin sheen. The mintage of 2,680 pieces was low to begin with. Relatively few were saved as there was minimal numismatic interest in circulation strikes of this denomination during the Civil War era. Most of the survivors show varying degrees of circulation. The apparent scratch, across the upper reverse of the piece, is actually located on the back of the PCGS holder, and is not on the coin itself. Not only is this a rare date in any grade, but in this Gem preservation it is a rarity deluxe.