The S.S. Central America and The Unique Harris and Marchand Bar 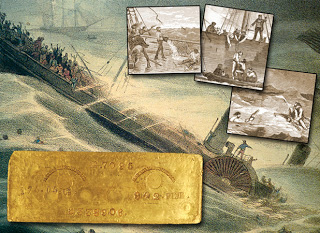 by Q. David Bowers
From the Desk of Q. David Bowers
t was a dark and stormy night way back on Saturday, September 12, 1857. Far off the coast of North Carolina the S.S. Central America, carrying several hundred passengers and millions of dollars in gold coins and ingots, was on its way from Panama to New York City, having taken aboard the people and cargo at the port of Aspinwall. The passengers and treasure had connected from San Francisco to Panama City on the Pacific side, crossed land on the 48-mile-long Panama Railroad, and were now on their way home. In the days before weather forecasting was a reality, when the storm arose a few days earlier it was thought to be a gale that would pass quickly. Matters worsened, turned into a tempest, and at 8:00 that evening the ship slipped beneath the waves, taking with it the majority of passengers and all of the cargo.

Fast forward to the late 20th century, when Tommy Thompson and Bob Evans began to study the lost ship. Using maps, estimates of wind velocity, data on currents, and other information, they mapped out an area containing hundreds of square miles far off the coast, where the ship may have been lost. After tracking back and forth with sonar and other equipment they came across several prospects, finally the remnants of a side-wheel! Not long afterward the ship’s bell, marked with the name, was brought to the surface, confirming the find. The recovery involved a specially crafted robotic explorer, Nemo, launched from a mother ship, which went down to the depths and found what was called a “garden of gold”! Double eagles, octagonal gold slugs, and ingots were strewn about the sea floor. It was beyond believable.

In time the treasure was brought to the surface, and after various processes it was put in the hands of Dwight N. Manley, manager of the California Gold Marketing Group, to which I and Chris Karstedt lent our help and suggestions. A facsimile of the vessel’s side “The Ship of Gold,” was constructed, and offered visitors a chance to look through “portholes” and see gold coins, artifacts, and more, surrounded by old-time pictures, Gold Rush newspapers and the like, while nearby a little theater showed a movie of the recovery operation. Over 400 gold ingots were found and over 7,500 coins, the likes of which had never been seen before. In fact, the total weight of the recovered gold ingots from the S.S. Central America was hundreds of times more than the total of all Gold Rush ingots known to exist before, including those in the Smithsonian Institution and in private collections.

Marketing commenced, and before long everything was gone. There was some wondering here and there as to whether the enthusiasm would sustain itself, but as you read these words in 2012, more than a decade later, just about everything is worth a nice advance over the sale price, some items doubling and tripling in value.

Among the ingots there were products of five different assay companies, two of which, Justh and Hunter and Harris and Marchand, had a main office and a branch office. By means of examining the letter and number punches and taking measurements, Bob Evans and associates were able to attribute the various ingots to the different offices. One super rarity emerged, a unique ingot of Harris and Marchand attributed to Marysville. All other offices had at least a few dozen ingots, and one of them, the San Francisco and only office of Kellogg & Humbert held the majority of ingots, several hundred together.

So exciting was the news that Beth Deisher, editor of Coin World, called the S.S. Central America treasure the “story of the year.” Since then, the legend has continued, and today it remains one of the most remarkable finds that numismatics has ever seen.

Coming up in our Rarities Night sale as official auctioneers of the American Numismatic Association convention, the World’s Fair of Money held in Philadelphia this coming August, the unique Harris and Marchand bar will cross the block. It is anticipated that excitement will prevail and history will be made.