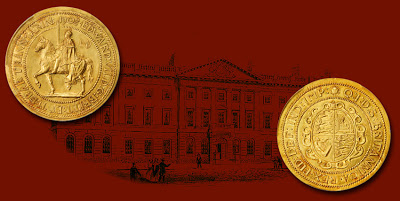 by Stack's Bowers Galleries
Paper Money of the Week
Featured in our January N.Y.I.N.C. World Coin and Paper money catalogs is a special group of banknotes to be offered within the final live section of the Stack’s Bowers Ponterio event January 11-12, 2013. The notes are all Specimen examples of their respective designs with most showing differing color varieties than seen on circulating examples. All were produced by what many feel to be the most artistic and desired printing company of banknotes, Waterlow and Son’s Limited. Several key items will be up for sale, including a famous P-167 Two Colones “Mona Lisa Note,” of Costa Rica described as follows.

Color trial specimen printed by W&S in black and multi-color. The most technically pleasing "Mona Lisa Note," we have had the pleasure of handling. The note is fully Uncirculated and shows with a definitive black tone in the bordering design as opposed to the issued brown inks for the design. Strong color of the multi color under-prints and guilloche add nice contrast and the Ox-cart vignette on the back shows in a green hue in favor of the typical black inks. Four punch cancels and diagonal overprints on face and back. The last we handled for the catalog number was a PMG About Uncirculated 55 EPQ issued note which realized $10,575.00 as lot 20085 in our August 2012 ANA sale. This color trial note will likely see the same spirited bidding.

Specimen printed by W&S. This very appealing large format specimen note is a design which seldom appears at public sale and issued notes of the catalog number are highly rare. The present example is seen in intended color with deep brown inks creating the bordering design and green under-printing at center with portrait vignette of a facing man at center. Waterlow specimen seal at lower left, six punch cancels and specimen overprints. Back seen with detailed shore scenes at left and right with head of Liberty at center. A small tear at the left margin is seen and does not interfere with the design. A great piece and an opportunity not often encountered.

Several dozen other scarce to rare Waterlow and Son’s produced banknotes are also offered from locations that span the globe. An important factor to consider with specimen banknotes is quality; many scarce to rare issued notes are simply unknown in About Uncirculated or Uncirculated, leaving eye appeal wanting in many cases. Fortunately the specimen notes did not circulate and most retain the same appeal as the day the inks were laid to the paper. Although some specimen notes are quite available, the majority of Waterlow and Sons specimen banknotes are scarce to rare.

These notes will be available for January 11-12, 2013, at the Stack’s Bowers and Ponterio Official NYINC Auction, held at The Waldorf Astoria, New York. Earlier viewings are also available by appointment in Irvine, California or New York City. To schedule an appointment, please call 800.458.4646 (West Coast) or 800.566.2580 (East Coast). High quality images and descriptions of all lots will also be available on our website at www.stacksbowers.com.