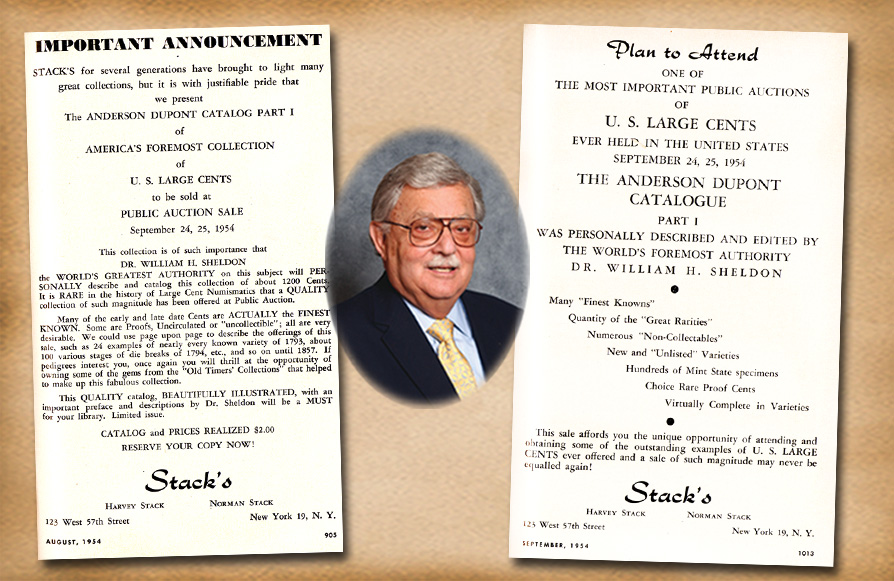 by Stack's Bowers Galleries
Harvey G. Stack Remembers
The large cent section of the Anderson Dupont Collection was scheduled to be offered in September 1954. Once again, Dr. William Sheldon, along with C. Douglas Smith, wrote the catalog for this superb group of large cents. As for the Davis Graves Collection, our 57th Street office became a large cent cataloging facility from 5 pm to about 10 pm in the evening, three or more times a week. While Dr. Sheldon and Doug Smith worked, I listened, looked at the coins and had an important learning experience.

Dr. Sheldon made notes to update his next book Penny Whimsy, so that the grading census, the basal values and other information could be as current as possible. Rarely does an author get such an opportunity to compare and correct his own writings by seeing two outstanding collections, virtually at the same time, and make his next book much better.

Again, the collection was widely publicized by Stack’s using direct mail, display ads in numismatic publications, word of mouth, and phone and personal contact. We provided for private showings, long exhibition displays and pre-sale viewing, all in our New York offices. The large cent collecting community spent hours looking at the coins, discussing their merits and anticipating the upcoming sale.

As expected by those who had attended the Davis Graves sale less than six months earlier, we were visited the day before the Anderson Dupont auction by Dora Nelson (DN as per her bidding initials). She sat down, viewed the lots she came to see, made her arrangements with Rose Zelman for credit and sat down and chatted a bit with me. When she returned the next day she took the same seat she had occupied at the previous sale and waited for the sale to begin.

Her arrival caused a stir in the room, as other buyers knew immediately that competition was in the room. Once he saw her, Dr. Sheldon turned to the group of buyers who had tried to work out arrangements between themselves to control the auction, and said: “It is every man for himself. Good luck to all and I hope you each capture something that you came to get.” And so the sale began. In the end the bidders in the room purchased items they wanted, those who had bid by mail captured some, and Dora Nelson went home with many of the coins she came for, forcing others to pay hefty prices to outbid her on those she did not win. This sale combined with the Davis Graves offering enhanced the lore of collecting large cents. The excitement I witnessed at these two sales has stuck with me all the years I have been in the hobby. Years ago, this excitement was termed “Copper Fever,” and the term still applies today to those who deeply appreciate the beauty of large copper cents.

Dora Nelson was acting as an agent for an important midwestern collector, who after three decades was getting older and his eyesight was failing. For a number of years he consigned coins to various sales of ours, but wished to remain anonymous, offering only parts of his collection at a time. DN came to be a friend to the firm and her attendance at the two 1954 auction sales made the events memorable to us and to all who witnessed her great skills as an auction buyer.