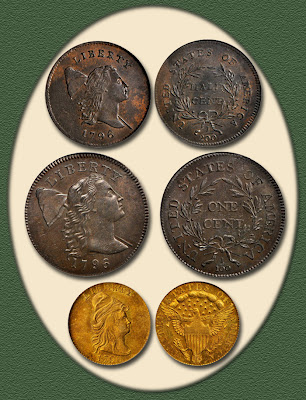 Rarities Night, August 9, 2012, was just one part of our series of auction sales that took place at the annual ANA World’s Fair of Money Convention, held this year in historic Philadelphia, Pennsylvania. Among the many highlights of the evening was the offering of the Werner Family Collection of 1796 Coinage, a group of nine coins, each high grade and each spectacular in its own right. Denominations represented in the 1796-dated collection included a half cent, one each of Liberty Cap and Draped Bust large cents, a half dime, a dime, two Draped Bust silver dollars, and two quarter eagles, one without and one with stars as part of the obverse design.

Lot 11167 was an example of the most desirable date in the half cent series, a 1796 With Pole variety certified MS-64 BN by PCGS, and with the added attraction of a CAC sticker. Mostly golden-tan with some bolder tan highlights, the Werner Family specimen represents the finest BN example of the date certified thus far by PCGS. With a recorded mintage of just 1,390 pieces, the 1796 half cent varieties, No Pole and With Pole, are among the rarest of all U.S. copper issues and are eagerly sought in all grades from well-worn AG up to Mint State. Very few Uncirculated examples are known, however, with most coming from English holdings over the years. The bidding was fast and furious for this notable numismatic treasure, and when the dust settled, the price amounted to a cool $402,500 (all prices include the buyers’ premium)!

The 1796 Sheldon-84 Liberty Cap cent, lot 11168, was another highlight of the Werner Family Collection. Graded MS-65 BN by PCGS and pedigreed to the collections of William H. Sheldon (from whom the Sheldon variety numbers in the early large cent series get their name) and R.E. Naftzger, the cent ranks among the four finest BN examples of the date certified by PCGS. It opened at a fairly modest figure, but the excitement soon mounted on the bidding floor, and before you could blink twice, the coin went to a new owner for a resounding $201,250!

One of the prominent stars of the sale – and not just of the Rarities Night portion – is certainly lot 11174, a PCGS-certified MS-61 1796 No Stars quarter eagle, one of the most famous and desirable of all U.S. gold issues. This amazing coin was in an old green-label PCGS holder and was awarded the coveted CAC “gold bean” sticker, representing a possible “upgrade” for the next owner of this rare prize. Just 963 examples of the type were struck during 1796, the first year of the denomination, with the No Stars design representing a one-year-only type that must be acquired for a complete U.S. gold type set. Needless to say, the bidding activity was bold for the lot, and when the last bidding paddle was hoisted in the air, the beautiful early quarter eagle found a new home at $402,500!

We are justifiably proud of the prices realized across the board – some $42 million – in our series of ANA World’s Fair of Money auctions, and we look forward to another round of successful sales next summer at the ANA’s 2013 annual convention, to be held in Chicago-Rosemont, Illinois. It’s never too soon to contemplate a nice consignment to the 2013 summer event. We can promise you that your coins will be in stellar company!