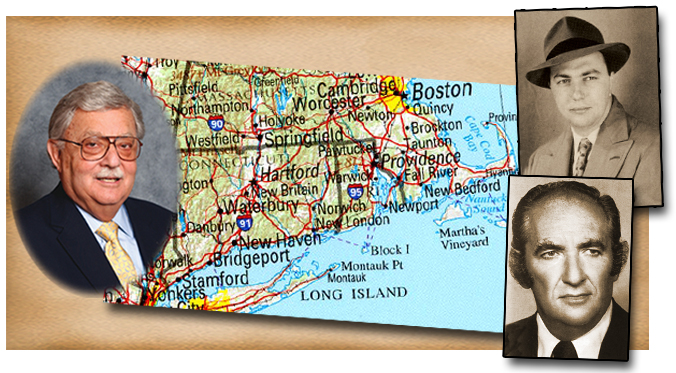 by Stack's Bowers Galleries
Harvey G. Stack Remembers
John J. Ford, Jr. was a legend in his own time. He worked for Stack’s in our shop on 46th Street in the early 1940s before he was drafted into the Army in World War II. He was a good numismatist, sharp and a fine teacher to those who would listen and pay attention to what he was saying. My cousin Norman Stack (three weeks younger than I) and I learned a lot about the hobby from John and the three of us became fast friends.

John returned from Europe in 1946 and once again was part of the Stack’s staff. However, in 1947 he received a unique offer to go into business with Charles Wormser (son of Moritz Wormser) and form New Netherlands Coin Co. This was to be established around the corner from Stack’s at the old Wayte Raymond offices at 1 West 47th Street. The opportunity for John was super and the Stack family encouraged him to take it. The two companies remained competitors yet good friends during the years that New Netherlands existed.

John could be eccentric and he did not value his time in proportion to his salary. He did not care if it took a page to describe a coin, even if it was only worth a few cents, and this made it hard for Stack’s to support his endeavors. But Charles Wormser, who wanted to imitate his famous father, was willing to spend the money to support John’s ways. For many years, Stack’s and John worked together on deals and ate late lunches on Saturday afternoons after the shop and offices were closed, chatting about numismatics into the early evenings.

In the early 1950s, several groups got together and formed the New England Numismatic Association, which met annually in a New England city. It was the trip to one such meeting, this one in Hartford, Connecticut, that this story is about. John asked Norman and I if we were going to Hartford. When we said we were he asked if he could get a lift and we said “Sure.”

Since Norman and I both lived on the North Shore of Long Island and John on the South Shore, his lovely wife, Joan, drove him to meet us at 7 am. My wife invited him in for breakfast, but John suggested that we get on the road to miss the traffic up toward Connecticut. He added, “I know a great diner, right off the road in New Haven, so we could rest, get something to eat, and then continue.”

Of course, Norman and I decided to take John’s advice and off we went. When we got to New Haven just off the road, as John said, was The Three Judges diner. We stopped, parked the car where we could watch from the diner’s window and went in to order breakfast. Then the adventure began.

Norman and I ordered the customary juice, eggs with bacon, toast, a piece of Danish pastry, and coffee. Then John ordered. He asked for a large glass of fresh-squeezed orange juice (no pits), half a grapefruit, a bowl of hot oatmeal (“and I mean hot,” he said), skimmed milk, pancakes (“Burnt, and I mean burnt!), coffee and a Danish. The waitress wrote down the order carefully, read it back to John who made some corrections, and off she went into the kitchen.

John took out a series of envelopes, each of which contained various pills. They were all colors and he started to explain each one — you would swear you were in a dietary lecture. He took them in a special order, leaving one packet on the table. When his juice arrived, he found one or two small pits in it, called the waitress back and asked her for a new one. She removed the glass, got another one, gave it to John who examined it carefully, shook his head and drank it reluctantly. Next came his cereal. He opened the next packet on the table and shook something that looked like wheat germ on the cereal, boasting, “this will keep my heart in good shape.”

Next came his pancakes, which appeared to be black as coal. Not black enough for John, however, as he sent them back to be cooked more. After the waitress went back to the kitchen, John continued: “When I say burnt, I mean burnt!” A few minutes later the waitress returned with pancakes as black as could be. John tried one and was still disappointed, as he saw some white dough.

Meanwhile Norman and I were trying to slide under the table, so no one would notice us, especially the waitress who decided to steer clear of our table as much as she could. When John noticed, he said, “I didn’t mean anything, I was just trying to get my order straight.” Eventually John left most of his breakfast on the table and headed for the door, saying, “Hey guys, pay the check!” Norman and I were glad to get out of there.

It goes to show that you never know a guy until you have breakfast with him. John was very eccentric about food (and other things as well). The many times I ate with him I found him to be informative, entertaining, and wild as a tiger. I also always found that I was left with the check to pay for whatever we had to eat.

But it was worth it as every meal was an adventure and a source of special information, not easily available from anyone else. To be a friend to John J. Ford, Jr. didn’t mean you had to be crazy, but it sure helped!